COMING SOON - A SNEAK PEAK OF, “A TRIBUTE TO THE HISTORY OF SPORTFISHING”. A very special thanks goes out to the International Game Fish Association, President, Jason Schratwieser and  Gail Morchower,  for their invaluable help in providing some of the most amazing historical footage and images we’ve ever seen.

This film series wouldn’t be anywhere near as rich and rewarding as it’s turning out to be without their support.

We are also honored to be working in partnership with the American Sportfishing Association on this project. As a national organization with nearly a century of leadership to the sportfishing community, the ASA stands together with anglers across the U.S. to promote and protect our sport for future generations.

Tami Ebbets Hahn has been instrumental in providing us with access and insights to her Father's iconic American photo collection, Charles E. Ebbets/ Ebbets Photo-Graphics.

We are also grateful to The Charles C. Ebbets Estate Archives. Ebbets was a world-renowned photographer and a lifelong fisherman who served 2 decades on the Metropolitan Miami Fishing Tournament Board of Directors. His archive of thousands of fishing photographs that span over 50 years has been an invaluable resource to this project.

Charles was one of the premier, if not, THE premier photographers of his time, loved to fish and working with his daughter Tami, who is an absolute blessing to this project. 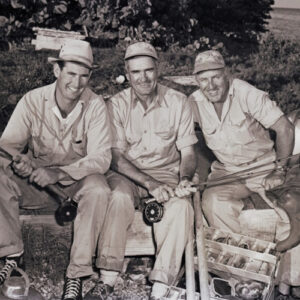 Ebbets at work in the Everglades

THE HISTORY OF SPORTFISHING Fishing is a sport that has grown in form and function like no other. Sportfishing was born of creative minds who transformed what was once a simple act of subsistence it into an art form. They used their passion and ingenuity to drive the sport forward and taught others the value that could be found in the simple act of catching a fish. Along the way, they also taught us that we are stewards of that which sustains us.

We invite you to join us on our journey as we pay tribute to the History of Sportfishing. Please click on “the Plan” link above for more details about the series. We are creating a 9-part television series on the history of sportfishing, produced in the spirit and style of award-winning documentarians, Ken Burns and Bruce Brown.

This project will enable us to preserve decaying old home movies, 8mm, 16mm and 35mm fishing films that have been collected over the years. Some of these films, nearly 100-years old,  are turning to dust in the archives because time has caused the celluloid filament in the film to dry out. The film stock is becoming so brittle, that these historic films must be digitized soon, or they will be lost forever.  The digital conversions will then be entrusted for safe keeping to the International Game Fish Association. "Southern California has a rich and unique history, from the founding of Avalon Tuna Club in 1898, to the innovation of kite fishing and the vast long-range tuna fleet. Nobody captures this history and spirit better than Michael Fowlkes. I know Michael will bring this history to life in this new series, with images and footage from the real pioneers.  Whether you're an angler or history buff, you will love this passionate project, sight unseen." The founder of the Award-Winning television series, Inside Sportfishing, Michael Fowlkes has fished his entire life. As the making of this series comes to life, we will take you along, with updates, stories, photos, film clips and interviews with Sportfishing Legends, Industry Leaders and Conservationists. Check back often as we begin this project to capture, The History of Sportfishing.

If you have any old fishing films, home movies, photos, a significant historical story or an individual you’d like to have considered being included in the series, please get in touch with us. Working together, we will make this history come alive!